What's the role of a connectivist teacher?

My answer to this questions can be found in this CCK08 Moodle thread, I'll post it here:

"As far as I see and as far as I have understood the connectivism model the role of the "teacher" is to sit back and let the students take control.

I mean sit back not with a bad connotation, of course SD and GS are not scratching their bellies!  They are very busy keeping this three or four ring "circus" going.  They invested many hours beforehand setting up the design, the layout, the Daily, pageflakes, Wiki, Elluminate, syllabus, inviting guest speakers, getting Dave to moderate, etc.

The most difficult part of online and offline teaching, is to get the learners flying on their own.   Connectivism strives towards learners independence, to decentralize the learning process, to avoid hierarchies. To get that going you need to kind of disappear at the background. If you jump in, the learners will tend to ask YOU to take the lead. Because they recognize you as an authority figure, you'll mark and evaluate them.

I think a connectivism course doesn't have to be "cold" or "detached" to avoid learners dependency.  Webheads, for example,  don't promote dependency and their sessions are full of generosity and kind encouraging comments.  They set tutorial's mechanisms at the side and point learners to go, click away, find out and sort things for themselves.  They also, as a rule, set aside a week for informal networking along with a Nettiquete code. That time is used to make sure that all participants know how to handle their email accounts to avoid the overload feeling, to free participants from the technology issues to be able to focus in the content." 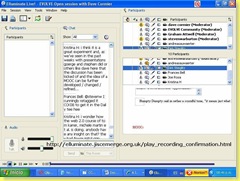 I was very impressed by the way Dave Cormier handled the  evaluation of the CCK08 in his Elluminate session: with honesty. The picture is a screen shot of that session.

As Dave Cormier mentions, Webheads are kings on teaching online a knowledge moving target without losing people along the way.

I found some of Stephen Downes comments evaluating somehow the CCK08 course at one of Graham Attwell's  posts.

I also found Cristina Costa's reflections about a course she gave, she is on of my admired Webheads, I don't know if her course had a connectivist approach but I definitely like the way they encouraged and aided the learners to participate; from backstage.

Preparing this post I ran across an open eye slide presentation that touches responsibility, enabling and community creation in an open source platform.  By David Eaves.

Community Management Presentation
View SlideShare presentation or Upload your own. (tags: 2007 fsoss)
Posted by Maru del Campo at 11:38 am

Hi Maru - I have enjoyed reading this post (and your two most recent posts) and will come back to them all.

For now I just wanted to say that my experience is that the amount of intervention by a teacher in an online course is not constant, but depends on the course and the flow of the course. In my own courses I find that I am very active at the beginning of a course. I need to model and demonstrate what can be achieved by interacting online - and all the time I am asking participants to respond to each other. Then gradually, as participants respond more to each other I withdraw. Also after the first few weeks of a course I will often introduce some sort of group activity which also helps pull participants together and depend more on each other than on the teacher.

So my view is that learners need to be supported in becoming independent. If we just throw students in at the deep end at the start of a course, a lot of them will sink. On most courses the tutors hope to keep most if not all of the students on the course, and that takes some hard work by the tutors particularly at the beginning of a course.