Diving board and an empty pool. Week 5.

I thought I had started the week on the right foot. I did the readings and audio files for the week on Sunday, I also prepared the images and links for this posts which was planned to be released on Monday afternoon. I printed “That Group Feeling”, read some blogs, left comments, started answering at Moodle and WOA! The no break started making unusual fast beeps in the middle of a message to Carlos! I had barely time to post my answer to him, sorry Carlos I did not say goodbye, and turn off the PC. Unfortunately, the modem ended up fried due to the high variations on voltage and the telephone company promised to come to check it today or tomorrow.

Nevertheless, I am posting my diving board for week 5 at a cyber place and hope to use it from here because the Internet pool at home is empty. I decided not to reply to comments in my blog, I will go the owner of the comment's mblog and reply there, in that way I will learn more and probably connect better. I may be able to come on Friday for the live session. I will reflect on dry land :-)

To leave a comment at Stephen’s post “Groups vs Networks: The class struggle continues.” I was prompted to subscribe, which I did. The following image showed up and I started laughing. I though this was Stephen’s doing, a way to say that there are not walls at his site, but later I understood that probably I had done something wrong. 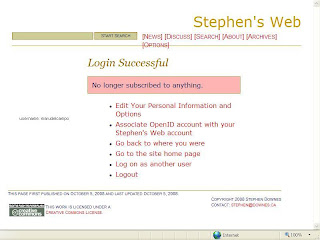 Hi Stephen!
It took me a long time to stop laughing after I registered, it took a screenshot of the image, I thought it was your doing but maybe it isn't, I'll post the screenshot in my blog.
Well, I enjoyed your rambling. I believe I understood what you mean, I will see the
presentation as well just to kick the wall. I guess there is a wall that's preventing me from understanding your concepts, I suspect what is it, I want to work it out. While I know very well which are my groups I am not sure which is my network or if I have one. As you mention, the two concepts are fused in my mind, rather, the concept of a network is new for me. I sense I am developing one right now with the connections of CCK08. Some of the people I contacted during the 1st week have a period of more than 15 of without logging in at Moodle, some have posted in their blogs and some appears to have vanished, that network is evolving; few people of my groups have joined the course but we don`t talk about it in our gatherings which comes as a break because I have been spending too many hours engaged in it.
See you around. Love: Maru

I found that placing the items to read and assimilate in my blog helps me a lot, so here it is this week's slideshow

| View | Upload your own

In the following video you can see Stephen in action explaining this chart: 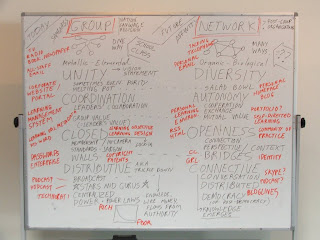 You know when you say that you don´t know if you have a network, I have to think that maybe the mexican and spanish people work allways in groups and not in network because we do the people in the network our close friends very fast and then they are in our "group" and not in the peripherical sense of network ; )... Ok, it is a joke, but Who know? jajjaja...
Love regards

Uhmmm... I wrote a veryyyy large comment... and now it is out.
Ok... Now I have not so much time.
I wante to say you: No problem with the not sended answer!
See you!

You are well orgnised with CCK08. I have just finished reading/listening to the core stuff for Week 3! So I have lots of catching up to do.

And I am just starting to read participant blogs...

Thanks for your candid posts! Your warm personality comes through the posts :D

Will check by again to chat...

Hi Maru!
About the idea of linking blogs... I find it genial, but I didn´t it before... I know that it exists "Trackback"... Wikipedia says:
"A trackback is an acknowledgment. This acknowledgment is sent via a network signal (ping) from the originating site to the receiving site. The receptor often publishes a link back to the originator indicating its worthiness. Trackback requires both sites to be trackback-enabled in order to establish this communication. Trackback does not require the originating site to be physically linked to the receiving site."
But it doesn´t exist for Blogger... Aaaaah!!! You can only do something call "Backlinks", but it isn´t the same... here the link to do it... http://buzz.blogger.com/2005/10/introducing-backlinks.html

I am going to test it, I hope it works, but let see...
About the question if "a Latin network has different characteristics than a non-Latin one"... I don´t want to go in typicals ideas or prejuges, but it is an interesting question, I think it is the big question for connectivitas, and that´s why maybe it is better if we speak about it there.
Besos
¡Hasta luego!